The Lost Dutchman Gold Mine – Found! 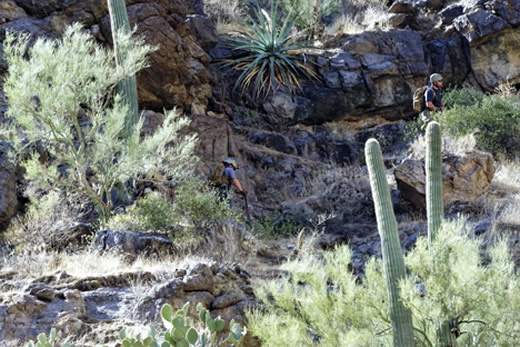 Arcana Exploration is made up of a group of five friends and supporters from central Ohio, who until five years ago knew very little if anything about the Lost Dutchman Gold Mine. As predicted by Waltz none are miners, they are in fact like most folks that are reading this post, just regular hard-working everyday folks with normal jobs, going to their kid’s ball games, playing the occasional round of golf, and in the fall deer hunting and going to Blue Jackets NHL games.

The only thing slightly off the cuff is that three of them do ride their Harleys from central Ohio to Sturgis and back on a regular basis, but more about them later.

For the first time ever, Arcana Exploration has undeniable physical proof that the mine exists, proof that is to say, photographic physical documentation that many of the generally excepted clues, are in fact real and do exist and are physically present in one location.

Over the next few weeks and months I will share some photo’s that will not give away the location but will show things that until now have never been shown before. Arcana Exploration has been there on four separate trips the first in October of 2015. We have imaging taken, with Go-pros, Sony 7000s; Osmo stabilized film cameras and Dji Phantom and Bee-bop drones. This photographic evidence taken at the site along with a selection of maps along with historical documentation, links historical evidence to present day boots on the ground reality.

We are currently in the process of planning for a return trip to further document our findings. Over the next few weeks we will provide some images and photos taken at or very near the site.

Some of you reading this may know a lot, about the Lost Dutchman Goldmine, others may be new to the story of the Lost Dutchman Mine, so before going much further, I will do a very quick overview. Later I will give more details and then begin providing information on how things fit together. Keep in mind for security reasons I have to for now be selective on what we divulge.